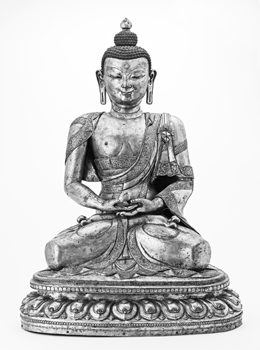 Sacred Mixes With the Scholarly in Sackler’s ‘Realm of Buddha’

A great Tibetan Buddhist shrine — the largest and only one of its kind in the United States — is tucked away below ground level inside one of Washington’s most prestigious institutions, the Smithsonian’s Arthur M. Sackler Gallery. Sounds like the beginning of a Dan Brown novel, but you won’t need Robert Langdon’s “Da Vinci Code”-deciphering skills to uncover this sacred space buried in the heart of the nation’s capital.

“The Tibetan Shrine from the Alice S. Kandell Collection” is an exhibition of about 250 sculptures, chests, tapestries, musical instruments and other works of art from the 13th to 19th centuries set up in a shrine room according to religious requirements. The atypical display complements and contrasts with the neighboring “Lama, Patron, Artist: The Great Situ Panchen,” a more traditional museum exhibit at the Sackler Gallery and the first in the West devoted to a historical Tibetan artist: Situ Panchen Chokyi Jungne (1700-74). Both are part of “In the Realm of the Buddha,” a celebration of Tibetan Buddhist art taking place throughout the spring and summer.

The works in “Lama, Patron, Artist” are visually striking, but the back story of Situ Panchen’s life is the real draw here. A revered incarnate lama and accomplished polymath, Situ made significant contributions to the literary arts, medicine and diplomacy of 18th-century Tibet by working within Chinese cultural circles. He also revolutionized the course of Tibetan art, which, as the Sackler notes, “had long been an important aspect of Buddhist monastic tradition, in which paintings and sculpture are employed as aids to support Buddhist devotional and meditative practices.”

Visitors can get a firsthand feel for these Buddhist traditions by stepping into the elaborate shrine room nearby. Kept until now in the New York City apartment of collector Kandell, the shrine is considered a sacred space and has been blessed by the local Tibetan Buddhist community, according to Debra Diamond, curator of South and Southeast Asian art at the Freer and Sackler galleries.

“In someone’s home or a monastery, it would be set up according to the same principles, which is, in short, the most important or sacred sculptures are highest and central,” she explained. “So when we walk in, we’re facing images of Buddha and of great teachers and manifestations of the Buddha.” 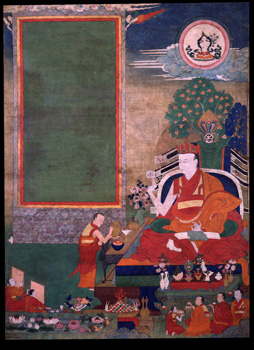 Those statues come in several forms, such as the one from Mongolia made of silver with seashell and coral adornments, or “Amitabha Buddha,” a 15th-century piece from central Tibet made of gilt copper.

Besides religious requirements, the shrine’s design is also based on artistic preferences. “There are some aesthetic principles that aren’t stipulated in texts,” Diamond said. “Generally there’s a certain urge toward symmetry and balance” — hence the main display’s triangular structure.

The objects glow in the U-shaped shrine’s dim, candle-like light, creating a serene, tranquil ambience in the 20-by-18-foot room. Still, the magnificence of the shrine as a whole cannot trump the intricacy and beauty of the individual items, including the 19th-century chests on which the items sit, as well as the rich tapestries on the walls — such as “Tsong Khapa,” a colorful appliqué made in central Tibet in 1834 that uses Chinese and Russian brocades, leather, pearls and horsehair wrapped in silk with gold foil.

Among Diamond’s favorite pieces are 17th- and 18th-century sculptures of the goddess Tara, also from central Tibet. “They have crowns and attributes that they were originally made with, and only major Tibetan sculptures were made with this kind of jewel-encrusted attributes and jewelry, but they often got lost over time,” she said. “Also, she’s very beautiful and she looks peaceful and compassionate, like she’s supposed to. It’s beautifully sculpted.”

Unlike most museum exhibits, no labels or text accompany the pieces in the shrine. Instead, catalogues are available outside the room. The goal is to enable visitors to experience the shrine much as they would if they visited a Tibetan Buddhist’s home in the Himalayas, Diamond noted.

“Many people have told me that Tibetan Buddhist art is too complicated for them,” she said. “There are a lot of deities, there are a lot of, technically, forms of the Buddha. So I think that you could just go in and experience this. You don’t really have to identify each one. That’s part of the reason why we left the labels outside.”

And that’s also where you’ll find “Lama, Patron, Artist.” Organized by New York City’s Rubin Museum of Art, the exhibit offers greater perspective on the evolution of Tibetan art, and the instrumental role that artist-scholar Situ Panchen played in that evolution. 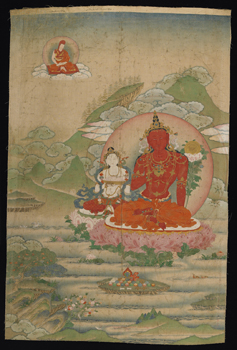 Besides being a religious leader, Situ is famous for resurrecting the “Encampment” style of painting, a merging of Indian-inspired figures and Chinese-inspired landscapes that originally surfaced in Tibet in the 16th century and spread by artists belonging to the Karma Kagyu order of Tibetan Buddhism. The style was all but lost after Mongols invaded in the 17th century, only to be revived a century later by Situ, whose workshop at Palpung Monastery created and designed paintings that continue to be copied today.

Three of the thangkas, or scroll paintings, on display here are directly attributed to Situ, though most are copies. One 19th-century painting, “Situ as Patron,” shows the Tibetan scholar with his students. “He would have visions and explain them to artists,” Diamond noted.

She hopes viewers of both exhibits are moved by what they see. “For me, going back and forth between the museum display with an art historical narrative and this experiential space, I think the works look and feel very different,” Diamond said.

She added that visitors have had widely ranging reactions, especially to the shrine. “It’s beautiful and moving, and people burst into tears. But I’m not saying that people should burst into tears. I just want them to be able to go back and forth,” she said. “The boundary between what’s cultural and what’s religious doesn’t fall in the same place in Tibet as it does in the United States. To show their art in as full a cultural context as possible, we arranged it this way.”