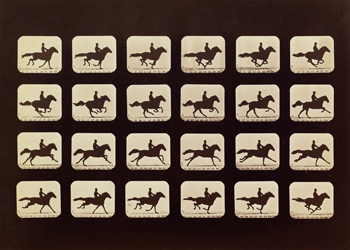 From Locomotion to Landscape, Muybridge Was Unstoppable

Eadweard Muybridge was nothing if not ambitious — and visionary.

PHOTO: BOARD OF TRUSTEES, NATIONAL GALLERY OF ART

The pioneering English photographer’s work helped launch cinema, while encompassing some of the most pressing issues of the mid-19th century. Industrialization, Native American struggles, ecological preservation — Muybridge explored all of these subjects and more.

He was also one heck of a self promoter, carving out both critical and financial success as he literally scaled mountaintops that no one else would climb to obtain the most spectacular landscape photos of his time. Muybridge’s compelling and transcendent career is exhaustively chronicled in a riveting new retrospective at the Corcoran Gallery of Art.

More than 300 objects from nearly 40 collections are featured in “Helios: Eadweard Muybridge in a Time of Change,” which details this groundbreaking artist’s early work producing classical, large format landscapes, as well as smaller side-by-side images and portraits during the mid-1800s.

The latter half of this sprawling exhibition, beginning after 1878, shows how Muybridge forever changed the way we view photographs — and the world — with his instantaneous, sequential stop-motion images of running horses that were essentially among the world’s first movies. The display also includes the only surviving Zoopraxiscope, an apparatus he designed in 1879 to project motion pictures that is being exhibited by the Corcoran for the first time in the United States. 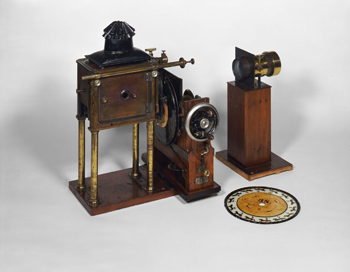 Philip Brookman, chief curator and head of research at the Corcoran, said that beyond Muybridge’s cinematic contributions, his influence on contemporary art is undeniable. “The enormous impact of Muybridge’s photographs can be found throughout modern art, from paintings and sculptures by Thomas Eakins, Edgar Degas, Umberto Boccioni, Marcel Duchamp and Francis Bacon, to the 1999 blockbuster film ‘The Matrix’ and the music video for U2’s hit song ‘Lemon,'” Brookman said.

In addition to the stellar artistic showcase, the Corcoran’s curators also succeed in conveying much about the personality of this innovative yet eccentric landscape and survey photographer, documentary artist and war correspondent.

Early in the exhibition, we get a glimpse of one of Muybridge’s most famous photos. “The Astonished Woodchopper,” an 1867 silver print, shows a man wielding an ax and standing at the foot of a giant sequoia tree in the Yosemite forest. The image conveys man’s determination to progress, or move forward, no matter how daunting the challenge. It could also serve as a metaphor for Muybridge’s own career, which took him from his native Britain to San Francisco, Philadelphia and throughout the American West (images of which he published under the pseudonym Helios).

“Pioneer’s Cabin” shows a rudimentary shelter carved into the base of yet another sequoia. The surreal, side-by-side imagery of the tree bases makes it appear as if a giant dinosaur had plopped his feet down in the forest.

Muybridge’s Yosemite images — and there are many in this exhibition — are notable for the mere fact that they are some of the earliest recordings of this magnificent American landscape. Also important was Muybridge’s dogged commitment to traverse the rugged terrain. Some of his aerial views — especially when his camera lens is peering deep into a valley or across the top of a waterfall — provide stunning displays of light and illuminate the natural grandeur in a way never seen until Muybridge came along.

Consistent with his approach to his art, he not only captured mesmerizing images, he also knew how to sell them. “Yosemite Tourists” — which depicts a group of city folk all dressed up for an adventurous trip to Yosemite — demonstrates Muybridge’s flair for marketing. The image was used to help promote the park. 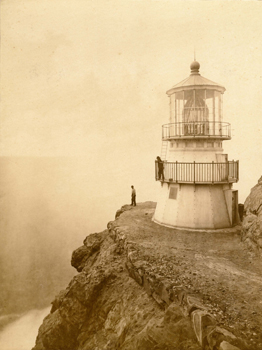 In 1871, Muybridge was hired by the Lighthouse Board, a federal office created in 1852 to oversee the construction and maintenance of all lighthouses in the United States. The government needed photos of the lighthouses to demonstrate the need for their repair, and Muybridge got the nod. It was simply a job, but true to form Muybridge turned the task into art. His photos of the lighthouses and surrounding terrain comprise some of his most meaningful — and hauntingly beautiful — photographs in the exhibition.

“First Order Light-house at Punta de los Reyes, Seacoast of California” is perhaps the most well-known piece from this period of Muybridge’s career. A craggy lighthouse is perched just a few feet from a steep cliff. Fog and water dominate the image. You almost get vertigo from staring at it. The effect is eerie, otherworldly, unsettling and beautiful.

Equally notable is Muybridge’s work depicting the development of the city of San Francisco. His panoramas from Rincon Hill reveal a somehow surprising amount of urban development for 1868. This already sophisticated city appears orderly, new and pristine. The images are some of the most important glimpses of San Francisco before the earthquake of 1906 forever altered the landscape.

The Corcoran’s Muybridge exhibition is so extensive, viewers will want to either pace themselves or return for a second visit to make sure they have enough energy and concentration to take in — at the end — what are, perhaps, the most important sections of the entire show.

In the 1870s, Muybridge developed new ways to stop motion with his camera. These world-renowned sequential photographs of running horses inspired the early development of cinema. Muybridge was also fascinated with the human form in motion, and the Corcoran shows us thousands of his images of often nude forms performing such acts as stooping down, sitting up, throwing a ball, carrying a basket, etc.

Some of these images are self-portraits of Muybridge, a lean but muscular man with a striking long white beard. Muybridge obviously had a high regard for himself and his expansive work. The “Helios” retrospective would make him proud.

“Helios: Eadweard Muybridge in a Time of Change” runs through July 18 at the Corcoran Gallery of Art, 500 17th St., NW. For more information, please call or visit www.corcoran.org.