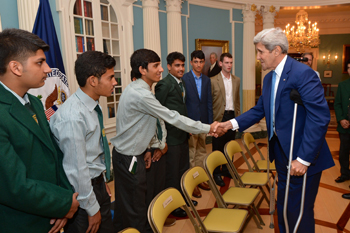 Dec. 16, 2014, is not a date 16-year-old Hammad Rahim and his classmates at Pakistan’s Peshawar Army Public School will ever forget. At 10:30 that morning, seven gunmen affiliated with the Taliban stormed the complex and opened fire on staff and students, killing 150 people including over 130 pupils, some as young as 8.

Governments around the world condemned the attack — the worst in Pakistani history — for its outright brutality and its intentional targeting of children. The aftermath marked a rare moment of unity among Pakistan’s factious political and military leadership. Even al-Qaeda issued a statement claiming “our hearts are bursting with pain.”

But the bloodshed didn’t succeed in snuffing out the enthusiasm of the school’s science-oriented students, a dozen of whom recently visited Washington as part of a program organized by the Meridian International Center and U.S. State Department.

“I’m very thankful to the Americans and the Meridian staff for arranging this tour,” said Rahim, who aspires to be an aeronautical or software engineer some day. “People here are civilized, caring and loving.”

Rahim was one of a dozen students attending a July 27 lunch co-hosted by Jalil Abbas Jilani, Pakistan’s ambassador to the United States, and Ambassador Stuart Holliday, president and CEO of Meridian (the group also met with Secretary of State John Kerry at the State Department). Rahim and his 11 classmates were accompanied on the U.S. tour by four American high school boys — one from Connecticut, one from Virginia and two from Maryland.

“We’re really not that different from each other, even though we grew up on the other side of the world,” Jonathan Foldi, a student at Charles E. Smith Jewish Day School in Rockville, Md., said of his new Pakistani friends. “And it’s not that hard to find connections with other people, if you look for them.”

The young men were in D.C. to attend the U.S.-Pakistan Global Leadership and STEM Program, which blends the study of global leadership with an intensive science, technology, engineering and math curriculum. They spoke to us on the condition that we not reference the attack itself, since the memories are still fresh and painful. 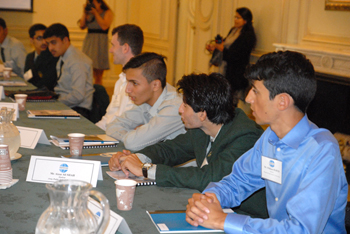 Visitors from Pakistan attend a July 27 briefing and luncheon at the Meridian International Center.

“We’re very pleased to have the boys here from Pakistan, not only because of what they went through last year, but because they really are the best and the brightest of Pakistan,” said Holliday. “They have a keen interest in STEM, and we’re seeing a lot of emphasis on that here at Meridian.”

The idea for the trip began almost immediately after the horrific attack, when Meridian contacted the U.S. Embassy in Islamabad and offered to run a program for some of the kids studying at the Peshawar Army Public School, which mixes boys and girls from kindergarten through eighth grade, then separates them for high school.

“All these boys were there that day, and a few of them were directly in the line of fire,” said Bonnie Glick, senior vice president of Meridian’s GlobalConnect Division. “We have many visitors from Pakistan, but what these young people have been through is a testament to their courage.”

Yet they don’t display any signs of bitterness at all, at least not outwardly.

“They seem like typical high school boys interested in social media and shooting hoops,” said Glick, noting that the school itself selected these 12 young men to participate, in a transparent process based on their grades.

“The exchange program we have with Pakistan is one of our largest in the world. We value these exchanges because they build links between people,” said Jonathan Carpenter, the State Department’s deputy special representative for Afghanistan and Pakistan. “These boys were the victims of a horrific attack, but I am astounded by their strength, resilience and courage.”

Among other things, the participants visited Ground Zero in New York — site of the 9/11 attacks — and stopped by West Point Military Academy along with key cultural sites in Washington. They also attended a five-day NanoDiscovery Institute program at SUNY Polytechnic’s Colleges of Nanoscale Science and Engineering in Albany, N.Y. The U.S. Embassy paid for their transportation and lodging, while Meridian designed and created the program itself, in collaboration with its corporate and educational partners. 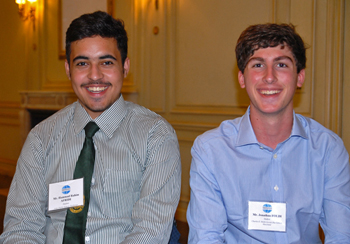 At right, Hammad Rahim, a student at the Peshawar Army Public School, and Jonathan Foldi, who attends Charles E. Smith Jewish Day School in Rockville, Md., share a laugh during the Meridian luncheon.

“The reality is, official bilateral relationships will be buffeted by and react to day-to-day events, but we believe the future of U.S.-Pakistan relations has to be deeper and broader,” said Carpenter, noting that education is one of the six working groups of the U.S.-Pakistan Strategic Dialogue. “The fantastic partnerships between American and Pakistani universities not only advance expertise in their particular fields — which is good for all of us — but also expose each community to the other. The more we cooperate with Pakistanis of all ages, the better our bilateral relationship will be and, frankly, the safer we’ll be.”

And that couldn’t come too soon for the testy relationship, which is on especially shaky ground following the revelation that reclusive Taliban leader Mullah Omar died two years ago in a Pakistani hospital, despite earlier claims by Pakistan that he was never in the country. U.S. officials have long complained that Pakistan harbors, or at least turns a blind eye to, certain militant groups that further the country’s geostrategic interests in Afghanistan and India. Islamabad counters that it has lost thousands to terrorist attacks and that it has waged several bloody campaigns against extremists (the Peshawar massacre itself was reportedly staged in retaliation for a Pakistani military offensive in North Waziristan).

Despite the ever-present bilateral tensions, Carpenter insisted that educational and cross-cultural exchanges let Pakistanis meet average Americans in a way that never happens in the course of an official diplomatic exchange.

“If you believe the polls, then attitudes toward the U.S. have improved,” he said. “These young men are the future leaders of Pakistan, and I think it’s important that they visit the United States, be exposed to our beliefs, see how we operate, read our press and hopefully meet some of us.”

Carpenter added: “I have faith that this will be an overwhelmingly positive experience for these students. I recognize that they may come across things that aren’t their cup of tea. But it is much more damaging for people to be ignorant of us than to be knowledgeable of us.”