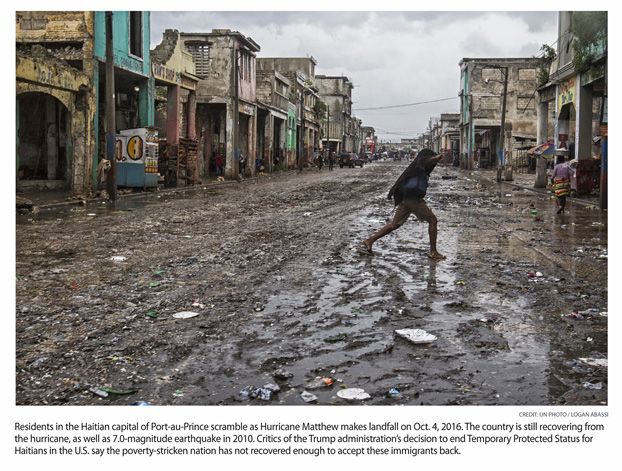 “America first” is a rallying cry of President Donald Trump, and that sentiment is at the heart of the administration’s protectionist policies. On immigration, the effect is a closing of some doors.

The administration has recently been performing what it considers bureaucratic cleanup related to Temporary Protected Status (TPS) immigrants, specifically those from Haiti, Nicaragua, El Salvador and Honduras.

The TPS program began in 1990 under President George H.W. Bush. The executive branch can designate and extend TPS for migrants if they come from countries with ongoing armed conflict, an environmental disaster, an epidemic or other extraordinary and temporary conditions.

Last month, the Trump administration announced it was ending TPS for about 59,000 Haitians in the U.S. on July 22, 2019. Earlier, the administration said it was ending protections for 2,500 Nicaraguans on Jan. 5, 2019. TPS was extended to Haitians following the 2010 earthquake, while Nicaraguans were given protection after Hurricane Mitch in 1998.

The Department of Homeland Security’s (DHS) Acting Secretary Elaine Duke has yet to make a decision on whether to extend TPS for those from El Salvador. At the moment, that TPS expires March 9, 2018.

Duke is also mulling over what to do about TPS for Honduran migrants. To give herself time, she extended TPS for Honduras by six months to July 5, 2018.

In total, the TPS program covers about 320,000 people living in the U.S. from 10 nations, many from Central America. Some have been living in the U.S. for decades with deep roots in the community, having given birth to American children and started businesses here. That’s why immigration advocates say ending TPS is a cruel decision that will uproot hundreds of thousands of law-abiding immigrants who have established lives in the U.S., forcing them back to countries that are ill-equipped to take them. In particular, that includes Haiti, the poorest country in the Western Hemisphere, as well as El Salvador and Honduras, which continue to be plagued by drug trafficking and gang violence.

But the administration counters that Temporary Protection Status was meant to be just that — temporary — and not a program that allowed recipients to repeatedly extend their stays for decades on end. It also says conditions on the ground in countries like Haiti have improved enough for immigrants to return.

In May 2017, then DHS Secretary John Kelly, who is now White House chief of staff, decided to extend TPS for Haitians by six months, letting it expire in January 2018. 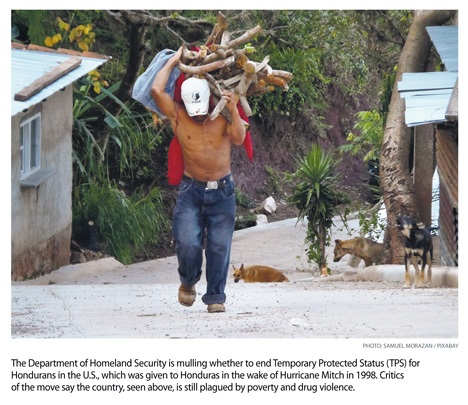 Kelly came to the conclusion that Haiti has recovered sufficiently from the 2010 earthquake and said that “Haitians need to start thinking about returning.”

“Haiti has made progress across several fronts since the devastating earthquake in 2010,” he said. “The Haitian economy continues to recover and grow, and 96 percent of people displaced by the earthquake and living in internally displaced person camps have left those camps…. Also indicative of Haiti’s success in recovering from the earthquake seven years ago is the Haitian government’s stated plans to rebuild the Haitian President’s residence at the National Palace in Port-au-Prince, and the withdrawal of the United Nations Stabilization Mission in Haiti.”

Kelly admitted that country has yet to fully recover, but added that TPS should not remain in place “until Haiti is a completely functioning economy with no problems.”

Duke ultimately agreed that Haiti’s TPS designation should expire, although she gave Haitians in the U.S. an additional 18 months to leave. The 18-month deadline will allow for an “orderly transition” so that Haitians can “arrange their departure” and their government can prepare for their arrival, Duke said.

“Significant steps have been taken to improve the stability and quality of life for Haitian citizens, and Haiti is able to safely receive traditional levels of returned citizens,” she said in a statement in November 2017.

But critics of the move say conditions remain bleak in the poverty-stricken nation, which is still recovering from a massive cholera epidemic and damage from Hurricane Matthew in 2016. According to a recent U.N. report, 2.5 million people in Haiti need humanitarian assistance. Schools, hospitals and entire communities have yet to be fully rebuilt, and according to the World Bank, nearly 60 percent of Haitians live below the national poverty line of $2.41 a day. The return of Haitians currently living in the U.S. could further weaken Haiti’s economy, which relies heavily on remittances from the diaspora, accounting for more than one-fourth of the nation’s income.

“There is no reason to send 60,000 Haitians back to a country that cannot provide for them,” Democratic Sen. Bill Nelson of Florida, home to a large Haitian population, said on Twitter following the DHS announcement.

“Almost eight years later, Haiti remains in total disarray and still requires much rebuilding,” Rep. Mario Diaz-Balart (R-Fla.) said in a statement. “These individuals are established, respected members of our communities who have made significant contributions, and I urge the administration to reconsider its decision regarding Haitian and Nicaraguan nationals.”

Nicaraguans were granted TPS in the aftermath of Hurricane Mitch in 1998, which led to about 3,000 deaths and over $1 billion in economic damage in the country, according to the BBC. DHS officials determined that “temporary conditions caused in Nicaragua by Hurricane Mitch no longer exist,” and the government of Nicaragua did not ask the U.S. for an extension of TPS.

In January and February 2001, several earthquakes hit El Salvador, resulting in at least 1,100 deaths, over 7,800 injured and more than 2,500 missing, according to U.S. Citizen and Immigration Services. The natural disasters also displaced about 1.3 million people out of the country’s total population of 6.2 million. In the aftermath of the quakes, more than 80,000 lived in temporary camps. Losses in housing, infrastructure and the agricultural sector totaled about $2.8 billion, the equivalent of more than half of El Salvador’s annual budget.

TPS was extended for El Salvador back in July 2016 to the new March 2018 end date. The government of El Salvador has asked the U.S. for another extension. Duke will have to make a decision by early January.

Like Nicaragua, Honduras was struck by Hurricane Mitch in 1998, which led to its TPS designation. The hurricane resulted in more than 5,000 deaths and the destruction of at least 70 percent of the country’s agriculture, according to the BBC.

Duke is still weighing factors, including advice from the State Department, before she decides what to do about Honduras. She has tasked her team to continue engaging with the government of Honduras as part of the process. “Information I received, including the Honduras country condition report from the Department of State, was inconclusive as to the ability of Honduras to adequately handle the return of its nationals into the country without major disruption,” Duke said in a statement. “Although not the basis for my conclusion as to the need for additional information, I note that the successful reintegration of TPS nationals back into the Honduran economy could have a significant impact on the Department’s recent efforts to stem the flow of illegal immigration, confront violent gangs, and thwart transnational criminal organizations.”

There have been reports that Kelly pushed for the end of TPS for Honduras, but Duke held her own, giving herself time to continue gathering information before deciding. 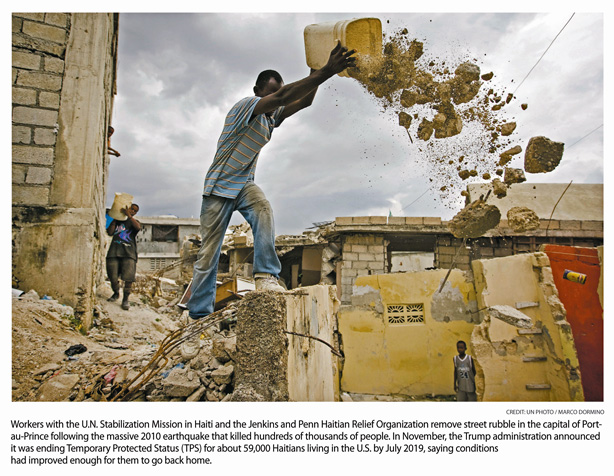 What Happens to TPS Immigrants?

The Pew Research Center, citing statistics from DHS, reports the following numbers of people with Temporary Protected Status: 46,000 from Haiti, 2,550 from Nicaragua, 195,000 from El Salvador and 57,000 from Honduras.

Haitians under TPS have potentially been in the U.S. for about seven years; Nicaraguans and Hondurans for almost 20 years; and Salvadorans for about 17 years. In all, TPS beneficiaries accounted for about 3 percent of the 11 million undocumented immigrants in the U.S. in 2015, according to Pew.

TPS is a temporary designation, but affected immigrants don’t necessarily want, or are prepared, to return to their original countries. Some Haitians have reportedly traveled to Canada and asked for asylum, for instance, to avoid being deported back to their home country.

Bipartisan groups in Congress have gone to bat for TPS immigrants. On the House side, Reps. Carlos Curbelo (R-Fla.), Frederica Wilson (D-Fla.), Ileana Ros-Lehtinen (R-Fla.) and Alcee Hastings (D-Fla.) introduced legislation to allow qualified migrants that arrived to the U.S. and received TPS protection prior to Jan. 13, 2011, to adjust their status to legal permanent residence. This could affect more than 300,000 qualified Nicaraguan, Honduran, Salvadoran and Haitian migrants. The bill is called the Extending Status Protection for Eligible Refugees (ESPERER) Act. “Epserer” is the French verb for hope, and the bill is perhaps a riff on the so-called “dreamers,” undocumented immigrants who came to the U.S. as children and are affected by the Trump administration’s rescinding of the Deferred Action for Childhood Arrivals (DACA) program. It has been left up to Congress to determine how to deal with those affected by DACA when that program expires in March.

“While hoping and waiting they would be able to return to their native countries for years, Nicaraguan, Salvadoran, Honduran and Haitian migrants have become essential parts of the South Florida community by contributing to our local economy and our culture,” Curbelo said in a statement. “The continued short-term extensions of TPS have created anxiety and uncertainty not only for these migrants and their families, but also for their employers and neighbors whose prosperity also depends on them. While I will continue to support extensions for Temporary Protected Status, this bipartisan legislation would give these migrants the peace of mind to continue giving back to their communities, contributing to our economy and supporting their families.”

“Congress needs to pass legislation to protect those with TPS,” Cardin said in a statement. “We need to give predictability and safety to people who are in uncertain status, and we need to stand up for the American values of compassion and diversity that have made this country stronger. Ending TPS will rip families apart and we cannot let that happen. We want the president to do the right thing, but only Congress can provide the permanent relief that is needed to take away the fear that families have right now.”

The American Immigration Council sees the latest TPS decisions as the heavy hand of the administration in action. “We think that the administration is not friendly toward, or amenable toward, Temporary Protected Status and appears eager to subject as many people as possible to deportation, despite the fact that these countries remain unsafe or unable to take them back right now due to the challenges they face, whether environmental disasters or conflicts or other types of violence,” Royce Bernstein Murray, the American Immigration Council’s policy director, told The Diplomat.

The counterargument emphasizes that TPS was not meant to spawn communities rooted in the U.S. “The ‘T’ in TPS stands for temporary,” Dave Ray, director of communications for the Federation for American Immigration Reform (FAIR), told The Diplomat in an email. “TPS was established to allow citizens of countries affected by some unforeseen event and were legally in the U.S. to remain here temporarily — until the triggering incident had passed. In each and every case under consideration, the immediate crises have long since passed, and, for the most part, the home countries are no worse off today than they were before the triggering event. In the case of Honduras, for example, the triggering event occurred in 1998. Temporary does not mean forever.”

TPS is in danger of being abused, Ray thinks. “If temporary isn’t temporary, then it will be hard to justify future TPS programs. TPS was never meant as an easy way to sidestep the legal immigration process.”