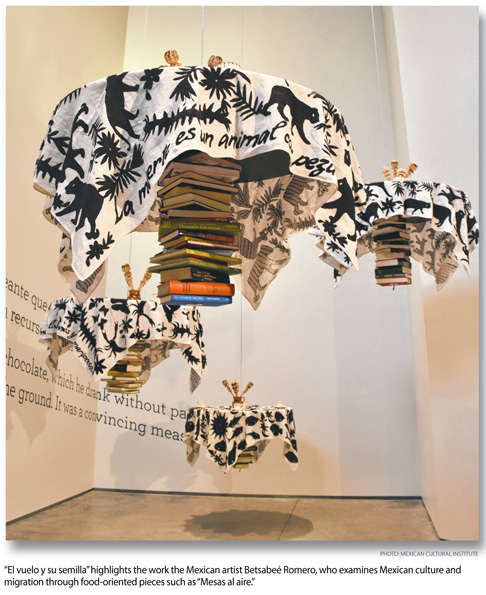 Two exhibitions tackling the immigrant experience and the very concept of borders are on display this month inside one of D.C.’s most remarkable, historic mansions.

The two shows featured at the Mexican Cultural Institute — “Bordes/Borders” and “El vuelo y su semilla” — offer distinctive takes on what it means to be an immigrant who must contend with the boundaries, both physical and personal, that the experience can present. Borders, as highlighted by the artists in the exhibitions, can be at once two things: a very real entity, like a wall or a line on a map, as well as a broader idea that can be constantly transgressed.

Executive Director Alberto Fierro Garza told The Washington Diplomat that the Mexican Cultural Institute always considers its exhibitions in light of today’s events — and these exhibitions were planned out last year following the heated campaign season when then-candidate Donald Trump made many incendiary remarks about Mexican immigrants. That meant it was critical and timely for the institute “to reflect on how important the relations between Mexico and the U.S. are,” he said.

“We are convinced that art has to do with reality,” Fierro said. “Artists do not produce in a bubble, but reflect what is going on.”

“Bordes/Borders” showcases nine short films by contemporary artists from Mexico, Belgium, Argentina, Puerto Rico, Italy and Israel. Borders, the films suggest, are not fixed, but instead constantly shifting constructions. Shown on loops in several rooms, viewers can watch a series of videos that deal largely with the ways technology mediates the immigrant experience.

In Italian artist Cristiana De Marchi’s “Doing & Undoing,” the word “borders” is embroidered and then the white thread is removed from the black fabric over the course of the short film. Borders, the piece suggests, may be noted on maps, but just like the stitching, they can easily disappear.

In Emilio Chapela’s “Matamoros-Tijuana, 2014,” the music catches visitors’ attention first. After settling in, you realize the Mexican artist has overlaid radio transmissions by a bilingual radio station over Google Street View pictures of all the roads along the Mexico-U.S. border from Matamoros City to Tijuana. It’s a compelling film that constantly challenges viewers, with images of the pre-existent fence installed along the border representing the physical boundary, constantly transgressed by the songs and hosts on the radio.

“We thought using videos was an interesting way to invite in the public and reflect on the realities of what is a border, and how artists have reflected on it through their production,” Fierro said. “It’s not only Mexicans talking about borders, but artists from different parts of the world.”

After wrapping up “Bordes/Borders,” visitors can take the stairs to the top floor to explore “El vuelo y su semilla.” It’s worth the walk: Along the way, you follow a magnificent three-story mural by Roberto Cueva del Río featuring images painted in the 1930s and early 1940s that depict in beautiful color and detail important aspects of Mexican history and culture. 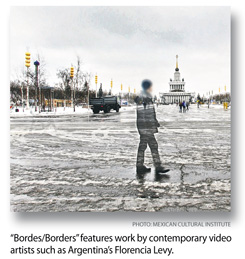 The top floor features “El vuelo y su semilla,” an exhibition highlighting works by Mexican artist Betsabeé Romero. Her installation pieces play with everyday objects like tires, tables and books, using them to explore the deeper Mexican immigrant experience. Several of her poems, in both Spanish and English, also accompany the works. Romero is an “artist who is also an activist for human rights, against violence against women, and against discrimination,” Fierro pointed out. “Most of her art has some activism, or a reflection on a social issue.”

For her show, Romero wanted to engage with the debate that the 2016 campaign spurred about Mexico, according to Fierro.

“Precisely because at the end of last year, with all the debate about who Mexicans are and about migration, she wanted to reflect on how Mexican migrants carry their culture, their food, their traditions,” he said.

In one standout piece, the poem “Tables in the air / Don’t have wings but / They carry the bread on their shoulders” hangs in a room dotted with several dining tables floating on string. Books about Mexico and Mexican cuisine, in both English and Spanish, are stacked underneath these tables, which are topped by tablecloths dotted with birds, scorpions and cats. The tables twist slowly, as bowls balance atop them.

One of the final installations on display is “For our bread (Por el pan nuestro),” a piece that encircles an engraved forklift tire with bread — recycling at its most creative. The memorable piece draws everything back full circle to the important factors of the Mexican immigrant experience that Romero has sought to highlight through food and movement.