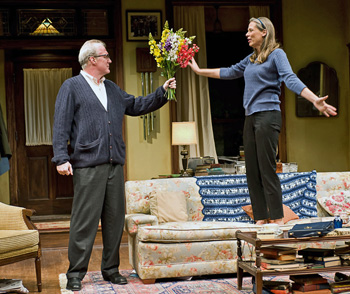 Arena Stage has bitten off another huge chunk of the D.C. thespian pie and is reveling in its ambition.

Within the span of two months, Arena’s Mead Center is hosting a far-reaching Edward Albee Festival — the first in a series that will spotlight a different giant American playwright each year.

Given that Albee is known for his unsympathetic mastery of the absurd, this will be a lot of bizarre for the buck. Theater-goers with thick skin and a large appetite for the exquisitely disturbing will certainly have plenty from which to choose — including 30 staged readings of all of Albee’s plays and two full-length productions. Others with a mellower theater palate may just want to pay tribute to one of the greatest living playwrights by catching a single show.

“Who’s Afraid of Virginia Woolf,” starring Tracy Letts and Amy Morton as the dysfunctional George and Martha, at the Arena Stage.

Either way, Albee admirers can experience a never-before-attempted feat: a festival highlighting the entire canon of work by America’s greatest living playwright.

With such a huge endeavor, Arena knew it couldn’t pull it off alone, so it enlisted the help of other theater troupes who are contributing performances — from Albee’s most signature scripts to his more remote works — in either the full-staged productions or readings.

The festival kicked off with two powerfully emotional punches: “Who’s Afraid of Virginia Woolf?” and “At Home at the Zoo.” The former is the handiwork of Chicago’s Steppenwolf Theatre Company; the latter is staged by Arena and combines the original one-act play written in 1958 that launched Albee’s career, “The Zoo Story,” with an introductory act he penned a few years ago. The newer prequel explores the strained relationship Peter has with his wife at home right before he decides to visit the park where he meets Jerry.

Although most have experienced an Albee play or two, here and there, and been strongly affected, the genius of this festival allows an audience, by total immersion, to compare and contrast one author’s works on multifaceted levels — and come up with a stronger grasp of the whole.

Both “Woolf” and “Zoo” were written by Albee at the start of his career (late 1950s and early ’60s) and are critical of America’s lustful adoption of post-war materialism, shining a harsh light on the extremes of the negative human condition.

The differences lie within the settings and characters.

“Woolf” is tediously chaotic. It’s a three-hour saga of late-night, incessant ranting and relationship conflicts bedeviling two couples sequestered away in a small college town, in a home cluttered with abandoned stacks of books, papers and liquor bottles. The audience is bombarded with emotion overload from the moment George and Martha step onstage.

“Zoo,” by contrast, is hauntingly sparse. Its world is materialistically minimal (maybe to represent the characters’ lack of souls?) — just a few sticks of furniture to connote a living room and two benches for a park. It starts off slowly and innocently, only to menacingly build up in terror, as does any good horror story.

Both plays are word heavy. The characters in “Woolf” use stinging dialogue to assault each other while hiding behind their own vulnerabilities. The characters in “Zoo” use language to expose their weaknesses as a last-ditch, futile attempt to find reprieve in a world that lacks true meaning and compassion.

“Woolf” features Pulitzer Prize and Tony Award winner Tracy Letts as George and Tony Award nominee Amy Morton as Martha. The fact that they are Steppenwolf veterans who have worked together for years easily translates into the realism of George and Martha’s long, festering marriage. Letts skillfully portrays an unusually sensitive and sympathetic George who quietly vacillates between tolerating and trying to crush Martha’s cruel dominance. Morton counters with an unapologetically aging, unglamorous, vindictive Martha who loses her obsessive stronghold by the play’s end.

Carrie Coon, as Honey, and Madison Dirks, as Nick, round out the ensemble as the unwitting couple pulled into George and Martha’s vortex of destruction. Their portrayals, however, are not the often disappointing caricatures seen in other productions. Coon’s Honey precipitously hovers on the fence between naïve, wallflower victim and manipulative, desperate alcoholic. Dirk embraces the villainous part of Nick, who drowns out his gentlemanly front with eager greed and indiscretion. 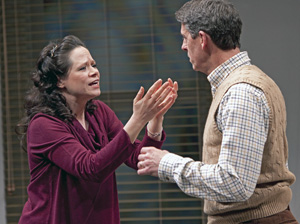 “At Home at the Zoo,” with Colleen Delany and Jeff Allin, at the Arena Stage.

“Zoo” is equally, if not more, successful as an exercise in human pathos. This is mostly due to the fearsome acting chops of James McMenamin (as Jerry), who has the seemingly impossible mission of carrying the second act in an extended monologue. During a random encounter at the park, McMenamin takes his sweet time sizing up the distracted, cocooned Peter before speaking. By the time he utters the ominous, “I’ve been to the zoo,” the intensity onstage almost explodes and builds into a tour de force that never falters.

Adding to the productions’ triumphs are their masterful sets, kudos of designers Todd Rosenthal (“Woolf”) and James Noone (“Zoo”). “Zoo” is staged in Arena’s newly constructed Kogod Cradle, in which Noone strategically places the bare necessities to showcase Albee’s haunting dialogue. “Woolf” is performed in the upgraded, intimate Kreeger Theater, where George and Martha’s frenzied life and living room practically spill out onto the audience. Theirs is a prop master’s dream, a feast for the eyes, and a house cleaner’s nightmare. It is absolutely fitting for Martha’s iconic line, “What a dump!”

Leaving the theater, after seeing these masterpieces and voyeuristically witnessing these characters’ violently poignant lives, you’ll know you’ve beheld something horrid, retched, unspeakable and yet, magical. Like it or not, you’ll have succumbed to the Albee spell. But don’t worry — you’ll recover just in time for the next show.

At Home at the Zoo
through April 24