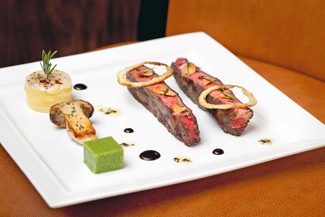 Penn Quarter’s ongoing evolution has sparked intense interest in the downtown restaurant scene. But unfortunately, a refined dining experience can be hard to find amid all the hype. Back in the day, a $200 dinner bill meant a dropped fork was replaced immediately and a sommelier would work hard to help pair offbeat menu selections with truly complementary wines. Sometimes at Penn Quarter’s flashier eateries, that level of effort seems quaint.

Thankfully, Elisir has arrived to remind us that details still matter. The unassuming yet uniformly excellent new fine dining establishment, led by former Galileo chef Enzo Fargione in a non-descript slice of real estate at 11th Street, NW, has a promising future in Washington.

Elisir’s attention to detail was evident immediately upon our arrival on a chilly January night as a hostess offered warm greetings and announced that our white linen-capped table was ready. And what a table it was. Dining on a Monday meant front-and-center seating next to the brightly lit open kitchen. The perch allowed us to peer in as Fargione and his talented assistants prepared his vision of a modern Italian feast. 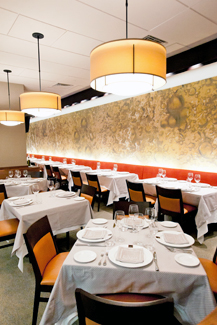 So, yes, the table was perfect and we had very few quibbles with Elisir overall, but let’s get one minor complaint out of the way. While the restaurant is immaculately clean and attractive, the design left us a bit cold. Bathed in cool crèmes and tans with shiny black tile floors, the dining room seemed a bit clinical, like something that might be attached to a Hyatt Regency. A splash of effervescent wallpaper along the back wall livened things up a bit, but the room doesn’t have Rasika’s warmth or Fiola’s glamour.

Of course, the main attraction here is the menu. Any doubts about style were forgotten with the first glorious bite. An amuse-bouche of seared tuna topped with tiny fried capers opened the palate and then lingered with the sharp flavor of fresh ground black pepper. On a separate plate, an array of basil, Chianti and black olive-infused sea salts shimmered like semi-precious jewels next to tiny pools of golden olive oil. The gorgeous trio of salts and oils elevated the bread to something approaching royalty.

The delicious introduction made our task of choosing from the extensive, varied and highly detailed menu more challenging than usual. Eventually, I chose the tasting menu, leaving my culinary adventure in the hands of the accomplished chef. During a brief stop at our table, Fargione explained that about 70 percent of his customers opt for the tasting menu. My dining companion was tempted by the tasting menus (offered with seven or 10 courses), but an a la carte offering of saffron-scented risotto with port wine-braised veal cheeks, roasted artichoke hearts and shaved black truffle proved too seductive to resist. My friend prefaced the risotto with a multi-colored beet salad. We’ll explore that wondrous concoction more fully in a moment.

Our skilled, cheerful server allayed our concerns about pacing a meal that included seven courses for one diner and two for the other. I decided against the $65 wine pairings that accompanied the seven-course tasting menu. Instead, the ever-accommodating staff — clad in suits and ties — suggested four half-glasses of appropriately paired wines at half the price, an ingenious suggestion. 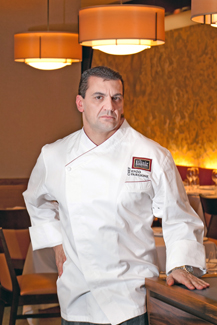 Former Galileo chef Enzo Fargione has revived the lost art of fine dining in the glitzy Penn Quarter with his new restaurant Elisir.

But let’s get back to that beet salad. The words “beet salad” don’t typically conjure visions of culinary whimsy, but that’s exactly what Elisir’s version delivered. Served on a discreet bed of mache greens, the dish includes an exquisitely creamy and slightly tart goat cheese gelato, an array of purple, yellow and candy-striped beets served with crispy leeks, and a smattering of ground morel mushrooms, almonds and coffee. The salad isn’t just an explosion of flavors and textures; it’s also pure fun. The deconstructed ingredients give the diner a measure of creative control in deciding how to assemble each bite.

Next, baked Chilean sea bass announced its arrival with a powerfully appealing aroma. The delicate chunk of fish, perfectly plated with celery, spicy curry salt, pickled purple potatoes and charcoal oil, was a feast for the eyes and the olfactory senses. The wildly popular fish itself, however, was typically timid. To enliven the course, I dabbed at the charcoal oil drizzled around the plate, the flavors reminiscent of notes in a fine Islay Scotch. In Fargione’s skilled hands, even carbon and ash tastes appealing.

I asked my friend about her risotto — a glistening, deeply golden bed of tender grain spiked with amber-colored veal cheeks and slivers of black truffle — but I had a hard time getting her attention. Finally, after several beats, she turned her gaze toward me and made a pronouncement.

After taking a bite myself, I decided I couldn’t sum it up any better.

Dessert, a hazelnut tuile with candied hazelnuts and macchiato sauce, featured an espresso texture and was paired with a shot of tequila-infused cappuccino. The choice — mildly sweet, with rich undertones — was a playful end to a seriously accomplished meal.

At Elisir, Fargione reminds us buzz and flash aren’t necessarily synonymous with fine dining in Penn Quarter, but an exquisite meal can still be creative and fun. Bravo.