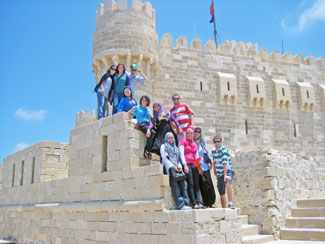 For the past 20 years, the Institute for Education has sought to serve as a bastion of calm and civility amid a political culture rife with polarization and partisanship.

This is, of course, not an easy task, and in today’s heated political climate, it’s somewhat of a novelty. But the D.C.-based nonprofit organization, which was founded by and is the brainchild of CEO and “coach” Kathy Kemper, has had success in bringing together and fostering a dialogue among diverse representatives from business, politics, diplomacy and media over the past two decades.

Those 20 years in pursuit of civility was the occasion of a Dec. 7 banquet at the stately residence of Belgian Ambassador Jan Matthysen to honor the Institute for Education (IFE) and its mission of “making world affairs our business.” The event, dubbed “Looking Forward, Looking Back,” was attended by a collection of politicians, diplomats and corporate leaders emblematic of the heavyweights who have supported IFE’s signature public policy roundtables over the years.

These IFE-INFO roundtables have become a staple on the Washington circuit, bringing together an eclectic range of luminaries such as Supreme Court Justice Samuel Alito, former White House Chief of Staff Joshua Bolten, Secretary of State Hillary Clinton while she was a New York senator, former CIA Director Michael Hayden, Undersecretary of State for Economic, Energy and Agricultural Affairs Robert Hormats, D.C. Police Chief Cathy Lanier, and ambassadors from Egypt, Indonesia, Israel, Japan, Kazakhstan, Monaco and Norway, among many others.

Participants in the LearnServe Egypt student exchange program stand in front of the Qaitbay Citadel in Alexandria.

“Greetings sports fans” is how Kemper — a seasoned tennis coach — welcomes her roundtable guests, and it was her opening at the Dec. 7 tribute dinner as well.

“For 20 years we’ve had the privilege of asking the questions, hearing the answers, and engaging with our speakers, usually gathering for breakfast before the rest of the town has had their first cup of coffee,” she told her guests.

Belgium Ambassador Matthysen, an IFE diplomatic steward, chimed in, adding a Miss America to that list of speakers and praising the institute as a “wonderful network to get to know new friends in Washington” — high-powered ones at that.

“IFE has been ahead of the game for some time now — stressing civility and dialogue at the expense of knee-jerk partisanship. It works,” wrote Pulitzer Prize-winning New York Times columnist Thomas Friedman of the group. “The people who attend IFE events understand that they are absolutely expected to make their points without holding back, but they know that IFE is different — there is good humor, fellowship, and a spirit of collaboration. And IFE attracts the nation’s leading officials as speakers, as well as an audience of who’s who in Washington. IFE has been and continues to be at the forefront of ‘changing the way Washington works.'”

In an interview with The Washington Diplomat, Kemper said that despite operating within the partisan vacuum, her guests, even the political big shots among them, virtually always respect the overarching message of civility.

“Everybody it seems that has come responds to it very affirmatively, and embraces it, and thinks it’s a very important component,” Kemper said. She added that they all believe in “solving problems and collaborating and building trust” as an antidote to the prevailing lack of comity, both across the country and inside the Beltway.

In addition to fighting the good fight on civility at home, the institute has also developed an international program, seeking to build links between Washington and the rest of the world. And it’s increasingly worked to engage the next generation of leaders in its efforts.

To that end, IFE hosts spinoff roundtables exploring topics such as emerging markets, media and technology, and “NextGen” talks. It also launched the Youth Global Citizenship Initiative to build a sense of international consciousness among young participants, many of whom Kemper has taken under her wing and who are often seen at her high-profile events.

IFE’s most ambitious endeavor has been its LearnServe educational exchange program, which debuted last summer. For six weeks as part of LearnServe Egypt, six students from American universities and six Egyptian students and recent graduates collaborated in teams, both in person and via social media, to create entrepreneurship projects that proposed business solutions to social problems in the Arab world and beyond.

The participants from U.S. institutions including Johns Hopkins University, American University, Lafayette College and the University of Pennsylvania traveled to Cairo for two weeks to meet their Egyptian counterparts and brainstorm ideas with marketing professors from the American University at Cairo, CEOs of technology start-ups, and other business leaders, including Wael Fakharany, country manager of Google Egypt. The Egyptian students likewise traveled to the United States for a two-week visit, meeting with some of IFE’s supporters, such as John Hamre, president and CEO of the Center for Strategic and International Studies (also see “LearnServe Egypt Exchange Seizes Moment of Opportunity” in the September 2011 issue of The Washington Diplomat). 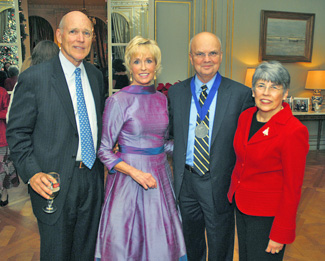 A signature of the Institute for Education (IFE) has been its IFE-INFO roundtables, the 20th anniversary of which was recently fêted with a reception at the Belgian Residence featuring some of the high-profile names who’ve headlined past discussions, including former CIA Director Michael Hayden, second from right, pictured with his wife Jeanine, IFE founder and CEO Kathy Kemper and her husband Jim Valentine.

“We have an exchange with American and Egyptian kids and they work on social entrepreneurship,” Kemper explained, adding that the institute can serve as an alternate channel of communications for nations when needed. “If countries are having issues with each other, we will be on call, often through the back door, to try and facilitate some sort of understanding or respect and try to find some answers to problems.”

The institute first began working to find solutions to world problems at an unexpected place: the tennis court — a reminder that sports can often be a unifying arena for building camaraderie and dropping partisan guards. Kemper, a longtime tennis pro who has coached various senators and officials in several presidential administrations, says it started with an idea from her husband.

“My husband Jim Valentine suggested to me that I should invite some of my tennis students that I was coaching … to get together with some of his people and have breakfast. It would be small and off the record and educational and be a nice dialogue with people,” she recalled.

The initial get-together seemed to be enjoyable and edifying for all involved, so Kemper repeated it. And repeated it again. And again. Eventually, her sessions developed a reputation, and people began seeking her out to request invitations. At that point, Kemper turned what had been a periodic and informal gathering into something much more enduring: the Institute for Education.

After decades spent on D.C. tennis courts, Kemper has the skinny on the skills of a number of White House bigwigs. Of the current administration, she says Gene Sperling, director of the National Economic Council, is probably the most skilled player. She also singles out James Baker (Ronald Reagan’s White House chief of staff and secretary of the treasury and George H.W. Bush’s secretary of state), Lloyd Bentsen (Bill Clinton’s treasury secretary), and Larry Summers (also Clinton’s treasury secretary, as well as a just-departed member of the Obama administration) as the Roger Federers and Rafael Nadals of previous administrations.

These men together have decades of service at the highest level of the executive branch in very different administrations, but Kemper laments that the personal relations among partisan rivals are now fraying and disappearing altogether. Kemper says she particularly noticed a change in tone around the turn of the century, when reactions to her proposed tennis matches began to change. Instead of signing up to square off against whomever Kemper had lined up, political operatives began to make sure that they didn’t have to share the court with their adversaries.

That wasn’t always the case; tennis used to be just tennis, rather than another theater of partisan warfare. “Years ago when one of my students would say let’s play some doubles, no one would ever ask who was playing, because they would trust me to pull together a good doubles game,” Kemper said.

She pointed to the invasion of Iraq as a possible source of the civility-eroding acrimony. Tensions were so inflamed that no one around Washington was willing to put differences of opinion aside and build personal friendships based on other activities, such as, of course, tennis. For that reason, underlying all of the institute’s events is an emphasis on sociability.

“Everything has to have an element of conviviality and friendship and fun,” she said. “And I think in Washington that’s a very important component, because we have a lot of people that are very smart, very academic and intellectual, and it’s important that people remember that laughter is healthy.”

But she declines to blame either party for the growing gap between the two. Her writing — she has a column for the Huffington Post and has blogged for the Hill — is decidedly nonpartisan, and hits many of the same notes that drive the institute’s mission.

“We’re not really political,” she said. “I never really take a stand on one thing or another. My stand is always that we try to look at the positive. And focus on the commonality, and embrace that.”

Kemper does, however, point to structural factors in electoral politics as eroding the civility of generations past. She blames expensive campaigns and the need for legislators to constantly concentrate on fundraising as a big part of the problem. Such efforts take politicians away from their colleagues, reduce the opportunity for the sort of conviviality the institute seeks to cultivate, and instead encourages them to fire up their donor base.

For her part, Kemper says she’s not a born fundraiser, and that she has struggled with that aspect of running a foundation, noting that IFE is constantly focused on making the best use of its resources and connections.

Nonetheless, after 20 years, the group is clearly doing something right. While the institute remains a small operation in a sea of mammoth think tanks and foundations, Kemper says she is thrilled with the niche her organization has found.

“I am especially proud of the team and the institution that IFE has grown into, to be a real integral part of public policy life and making world affairs our business. We’re a very, very small organization … and I am very proud of the positive and important footprint we have [had] over the last 20 years.”