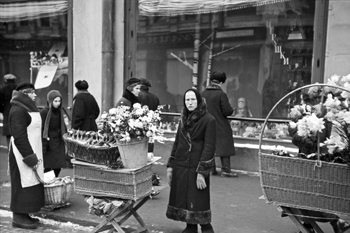 Late 1930s Moscow: the lavish metro stations under construction and official propaganda proclaim the greatness of the still-young Soviet Union, while Stalin’s show trials and purges of “enemies of the people” create an aura of acute anxiety. Meanwhile, the gold-laden art of tsarist Russia is being sold off to foreigners to fill the urgent need for hard currency and the massive industrialization projects that are transforming the Russian landscape and society — readying for a war whose inevitability was then unknown to America.

Into this charged atmosphere, on Jan. 19, 1937, stepped Emlen Knight Davies, daughter of the second U.S. ambassador to the Soviet Union, Joseph E. Davies. After two days and two nights of travel from Berlin, Emlen stepped off the train, arm-in-arm with her father and her stepmother, heiress Marjorie Merriweather Post Davies, onto the snow-covered platform at Belarus station.

“We were greeted by the entire staff of the U.S. Embassy — some in top hats — as well as members of the Soviet Foreign Office, American and local press, and many flashbulbs,” Emlen recalled. “Was it any wonder that I was smiling broadly and excited speechless? I was 20 years old!”

During her father’s posting as U.S. ambassador to the Soviet Union in 1937, Emlen Knight Davies, below, was able to photograph daily life in the Soviet capital prior to the Cold War, such as women selling artificial flowers in front of a department store, above. 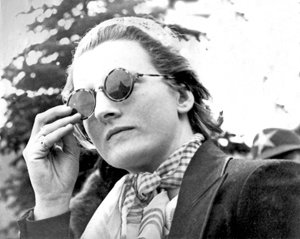 The front page of the Moscow Daily News recorded the arrival of Ambassador Davies and his accompanying family members — including the beaming Emlen. Over the following two years, Emlen would document, in black-and-white photographs and diary entries, her own impressions of daily life in the Soviet capital — a vision made possible, at a time when photography was banned for the general population, by her diplomatic privilege.

In turn, the images offer Americans a privileged peak inside a world that was a complete mystery to most outsiders, even before the Cold War when the Soviet Union became a communist conundrum for the West. But right before that window of cooperation shut down for decades to come, Emlen was able to capture a critical moment in history.

Visitors to the Hillwood Museum can now peer into Emlen’s world of 75 years ago as they take in the 30 large prints now on display in the exhibition “A Photographic Journey of the Ambassador’s Daughter: Moscow, 1937-38” — which was first displayed in 2008 at the U.S. ambassador’s residence in Moscow, the famed Spaso House where the Davies also lived.

The photographs and accompanying texts — written by Emlen together with her daughter Mia Grosjean, the guest curator of the exhibition — are being shown in the intimate setting of the Hillwood Estate’s “dacha,” the one-room, log cabin-style rendition of a traditional Russian summer cottage, fittingly tucked into sylvan surroundings at the edge of Rock Creek Park. With a soundtrack of “greatest hits” from the 1930s playing in the background, visitors will indeed feel transported to a different time and country — “at the end of the world, far from home,” as Emlen described it in her diary.

The photographs are startling for their intimacy, reflecting the unique perspective of youthful curiosity that Emlen’s lens captured. They range from the personal — Emlen’s private skating lessons with two handsome men at the Nemchinovka Dacha in 1937, for instance — to the public, quotidian life of Muscovites, walking, bundled up, through the snowy Park of Culture and Rest (now known as Gorky Park). All throughout, the ambassador’s daughter recorded images with a “very romantic quality of a different time,” as Estella Chung, Hillwood’s curator of American material culture, put it.

The photographs, painstakingly retouched by Grosjean in a digital process that could take three or four days per image, tell a compelling behind-the-scenes story of life in “fascinating and often frightening times.” They open a window on a glamorous yet foreboding era — an atmosphere captured, for instance, in a photograph of Joseph and Marjorie Davies standing beside a fancy diplomatic car on a snow-covered rural road, with the GPU, the Soviet secret police, waiting a short distance behind. The Davies family was under constant surveillance during their time in the Soviet Union.

Another photograph shows the banquet table in the Spaso House, elegantly set for a diplomatic occasion. As a hostess and entertainer, Marjorie Post Davies became legendary, in no small part because of the frozen foods she had sent from the United States. The General Foods Corp., of which she was a major shareholder, had purchased Birds Eye frozen foods in the 1920s.

Incidentally, one of Emlen’s favorite memories is when her radiator froze on a cold night and was repaired by a Belgian-American engineer, Bob Grosjean, who was sent to Moscow by an English company that was, upon Marjorie Post’s request, delivering and installing many chests of frozen foods. Emlen would meet the engineer again two years later during her father’s assignment as ambassador to Belgium and eventually become husband and wife.

“Marjorie,” as Emlen calls her, also began collecting Russian decorative, fine, and religious art during her stay in Moscow. “Every morning I went to the stores and put things aside for her,” Emlen writes in the exhibition booklet. “She would follow in the afternoon.” Thus began Marjorie’s decades-long fascination with Russian art, which gave Hillwood, the Washington estate she left as a museum in her will, one of the world’s premier collections of Russian decorative and liturgical art.

Hillwood is thus the perfect place for this exhibit to be shown. After viewing the photographs, visitors can head over to the main house, the mansion where artworks acquired during the Davies’ time in Moscow are marked with special signs.

As curator Chung pointed out, the “Ambassador’s Daughter” show would not have been possible without the documentary passion of Emlen, now 94. “It’s worth thinking about preserving some materials,” she said. Such foresight will allow future generations to preserve and share their family history. Given the right opportunities and an inspired eye, such intimate documentation can reveal a bit of world history as well.

A Photographic Journey of the Ambassador’s Daughter: Moscow, 1937-38