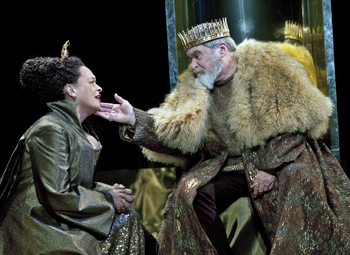 Everyone can agree the idiom “thinking outside the box” is overused. But is the concept also overrated? The answer might be an emphatic yes, if referring to the Shakespeare Theatre’s precarious decision to produce “Cymbeline,” a lesser-known play the Bard penned late in his career. Inherent problems with the script make the company’s undertaking an underdog that’s not really worth rooting for.

Even with director Rebecca Bayla Taichman at the helm — a Shakespeare Theatre veteran whose handiwork was largely responsible for the overwhelming 2007 success of “The Taming of the Shrew” — audiences are likely to be left wondering why she signed onto this project.

Taichman unfortunately had an almost insurmountable hurdle to overcome: a script that’s identity is, at best, nebulous. The tale revolves around Princess Imogen and Posthumus, the commoner she secretly marries. When their marriage is discovered, King Cymbeline banishes Posthumus, and the two lovers endure a long — and at times ridiculously convoluted — journey toward their happy ending.

Franchelle Stewart Dorn and Ted van Griethuysen star as the queen and king in the Shakespeare Theatre Company’s production of “Cymbeline.”

Taichman was too kind when describing the plot as “wildly complicated.” Not completely comedy or tragedy, history or romance, the play never fully finds its footing or stride. Instead, it wastes considerable time in an uncomfortable no-man’s land, resulting in quite a bumpy ride for the audience.

Fans of “Cymbeline” boast that it combines all of the above four genres, and liken the script to Shakespeare’s more famous works. It’s true that the play does include a plethora of the Bard’s signature themes: a magic potion, cross-dressing, mistaken identity, lies about adultery, and rejection of offspring.

“It’s kind of a rule-less universe in which he [Shakespeare] can play with all of these ideas that he’d been cycling through his entire life and ‘smush’ them together,” Taichman said. “It’s kind of a wild bid for freedom.”

But does this mixing and matching of plot ploys work in the play’s favor? Or, did Shakespeare just run out of new ideas as he was winding down his career, leaving “Cymbeline” to resemble a knock-off of his own blockbuster hits that would have been better suited for the cutting-room floor?

In her defense, Taichman and her artistic crew make a valiant attempt to make sense of the chaos by framing the play as a fairytale, seen through the eyes of a young girl. Riccardo Hernandez’s enchanting sets and Christopher Akerlind’s ethereal lighting craft a stunning environment. The play opens in aesthetic wonder. Set against a backdrop of a silvery forest and a billowy white curtain sleeps a young girl in her bed. The girl (Zoe Wynn Briscoe) is awakened (or is this happening in her dream?) by a storyteller (Dee Pelletier), who begins to read to her the tall tale of “Cymbeline” from a giant pop-up storybook. The trance-like quality of the play persists as the girl and her storyteller reappear at intervals, as do her reveries of misty characters who seemingly drift through the air (actually an upstage platform) in the girl’s consciousness.

Once the scene is set, the confusing tale commences to unfold. It goes something like this: Cymbeline, the king of Britain, has just banished Posthumus, a commoner, to Rome for secretly marrying his only daughter, Imogen. While in Italy, Posthumus unfortunately meets up with the evil Iachimo (sounds an awful lot like Iago from “Othello”), who convinces him that Imogen has been unfaithful.

This naturally causes Posthumus to order his servant to murder his lovely wife.

Meanwhile, back in Britain, the evil Queen (Cymbeline’s second wife) wishes her son from a previous marriage, Cloten, to reign and marry Imogen. (What’s a little incest going to hurt?) When this looks unlikely, she asks a doctor to poison Imogen. The plot then only becomes more convoluted, with a war between Britain and the Romans and some long-lost relatives thrown in for good measure. But everyone, all very abruptly at the end, manage to live happily ever after.

The casting decisions for this production are curious. Gretchen Hall is a visually stunningly Imogen, but she portrays the character that Taichman describes as “complicated, interesting, beautiful, smart and fierce,” as a single-dimensional lady-in-crisis at a fever-high pitch. Her love interest, Posthumus, portrayed by Mark Bedard, looks and acts more like her younger brother than a life-long passion for whom she’s put everything on the line. Yet, to be fair, due to the disorderly nature of the writing, these characters aren’t awarded the depth they deserve; and the actors may not be all to blame. On the other hand, Justin Badger and Alex Morf, who play the young woodsmen Imogen encounters in her search for Posthumus, add some local color and much-needed comic reprieve.

The characters of King Cymbeline (Ted van Griethuysen) and the Queen (Franchelle Stewart Dorn) are more caricature than not, but their lively frocks designed by Miranda Hoffman help to fill out their personalities. Cymbeline’s fur-trimmed cloak resembles a lion’s mare and the evil Queen’s gown is excessively lavish.

“‘Cymbeline’ is more magic show than history play,” said Shakespeare literary associate Akiva Fox. And kudos do indeed go to the imaginations of Taichman, Hoffman, Hernandez and Akerlind for visually transforming this production.

But beneath the charming surface, the play itself simply doesn’t rise to the Shakespeare Theatre’s standards. Adorned in exquisite costumes, scenery and lighting, “Cymbeline” resembles a forgotten recluse who gets all dressed up for the ball, but, for better or worse, has nowhere to go.