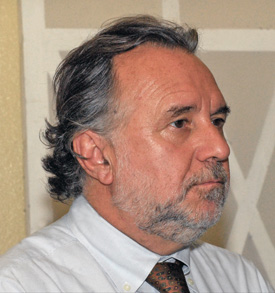 PORT-AU-PRINCE — As the United Nations prepares to draw down its massive peacekeeping operation in Haiti, the chief of that mission, Mariano Fernández, says his top priority is to help the country rebuild its earthquake-ravaged security institutions.

Fernández is a former Chilean foreign minister who served as Chile’s ambassador to the United States from 2006 to 2009. The chief of the U.N. Stabilization Mission in Haiti (known by its French acronym Minustah) for the past seven months, this world-savvy diplomat ultimately hopes to make his mission unnecessary.

“We don’t want to stay in the country against anybody’s will,” he told The Diplomat. “Once we leave Haiti, we hope never to come back. This is the main goal of any peacekeeping mission: to contribute in such a way that you don’t have to come back.”

He noted that Minustah was established in 2004 because of the turmoil and instability in Haiti, following the removal of former President Jean-Bertrand Aristide.

“By the end of the [Réné] Préval government, the United Nations thought it was time to reduce the mission because Haiti was much more stable,” said Fernández, interviewed recently on the sidelines of a conference on international assistance to Haiti (see main story). “But then the earthquake struck, and that was a huge setback. It destroyed Port-au-Prince and killed more than 200,000 people.”

In response to the January 2010 tragedy, the United Nations authorized Minustah to boost its strength with a surge of military, civilian and police personnel. Its fiscal 2011 budget is about $793 million, and the mission currently has about 8,900 peacekeeping troops, 4,000 police officers and 500 administrative staffers deployed throughout the Caribbean nation.

Though critical to maintaining security — current President Michel Martelly recently said the force needed to be preserved despite moves by the U.N. to reduce its numbers to pre-quake levels — Minustah has not been received warmly by many Haitians, to put it mildly. Quite the opposite: Its continued presence in the country remains a matter of enormous controversy.

A cholera outbreak that’s killed some 6,600 people and sickened an estimated 475,000 more in a country that hadn’t seen cholera in half a century is widely believed to have been brought to Haiti by Nepalese peacekeepers serving under the Minustah banner.

In early November, a coalition of U.S. and Haitian grassroots organizations sued the United Nations, charging that it didn’t properly screen peacekeepers for cholera, allowed untreated waste from a U.N. base to be dumped into Haiti’s main river system, and failed to adequately respond to the epidemic.

And a recent incident involving four Uruguayan peacekeepers accused of raping a teenage boy, an episode that was caught on tape and surfaced on the Internet, enraged Haitians, sparking violent protests in Port-au-Prince.

“We have zero tolerance in the case of the Uruguayans. We punished them immediately, and they were repatriated to Uruguay,” said Fernández, freely acknowledging that “many people don’t feel comfortable with Minustah, people who think we should not be in Haiti.”

Fernández, 66, took over Minustah’s mantle from Edmond Mulet, a Guatemalan lawyer who now directs U.N. peacekeeping missions worldwide (and who took over the Haiti post after his predecessor, Hédi Annabi of Tunisia, was killed in the earthquake). Coincidentally, Minustah’s first chief was fellow Chilean diplomat Juan Gabriel Valdes, a classmate of Fernández. And like Mulet, who was an exile during the Guatemalan military dictatorship, Fernández fled Chile during the Pinochet regime.

“I transformed myself into a journalist, came back to Chile in 1982, and became involved in opposition politics as a member of the Christian Democratic Party,” he told The Diplomat. “Then when we restored democracy, I was appointed ambassador to the United Nations.”

“Peacekeeping operations are very expensive,” he said, estimating that Minustah spends $120 million annually on contracts with Haitian companies and vendors. The mission has eight helicopters at its disposal — four from Chile, two from Argentina and two from Ukraine — as well as one Dash 7 commuter plane and a C-140 transport.

“We have seen success in two areas: cooperation with the Haitian National Police has improved a lot, and the operation against gangs has also been successful, particularly Operation Phoenix in July, when we hit some gangs in critical areas of Port-au-Prince. This is a success story,” he said.

“We are also working on a plan for reforming the police. There are now 10,000 police officers, in much better condition than two or three years ago. We’re in the process of setting up a superior police academy in Port-au-Prince, to provide them with new professional skills. They will have to attend the academy and pass examinations.”

In addition, said Fernández, “Minustah is fostering collaboration between Haitian and Dominican police. The general director of the Dominican National Police visited Haiti for the first time ever and met with his Haitian counterpart, who also came to the DR. There is also close political cooperation between the two presidents, Martelly and [Leonel] Fernández. In the end, it’s one island.”

The U.N. official said he typically wakes up around 6 a.m., because it takes him one hour to get to his office. Minustah’s old headquarters at the Christopher Hotel in suburban Petionville was destroyed in the earthquake; it has since relocated to new facilities at Log Base, adjacent to Port-au-Prince’s Toussaint L’Ouverture International Airport.

Fernández devoted his entire first month in Haiti to Port-au-Prince; more recently, he’s spent a considerable amount of time visiting Le Cayes, Cap-Haïtien and other outlying regions — as well as meeting members of Haiti’s parliament and coordinating Minustah’s activities with other U.N. agencies operating in Haiti.

“We are building a special cholera treatment unit in Cap-Haïtien and providing eight smaller cities with multipurpose halls, because the earthquake destroyed so many public buildings,” he explained. “We are also setting up street lamps in a country that goes dark at night because there is no light in the streets, especially in Cité Soleil [a crime-ridden slum of Port-au-Prince]. Wherever you have street lamps, you have more security.

“Once Haiti has the institutions in place to protect its citizens, then Minustah will be much closer to leaving,” he added. “We hope that with the new prime minister in office, we can collaborate on getting these institutions not only approved but really working in the way they need to work for society.”

But that’s easier said than done. It took four months after Martelly’s election as president for parliament to give its blessing to a new prime minister, having rejected two earlier candidates.

“We have a paradox in Haiti: a popularly elected president, but with no strength in parliament because there’s almost no real support,” said Fernández, who’s met Martelly four or five times since arriving in Haiti. “The two existing institutions — the head of state and parliament — must be accepted by Haitians as the legitimate government and must work together for the good of the country. At the moment, Haiti’s institutions are either very weak or not working properly.”

Fernández said newcomers to Haiti “learn immediately that institutions are crucial. If you look at countries that have experienced crises and are now success stories — Uruguay, Chile, Spain, even El Salvador — they’re always the countries that agreed to set up strong institutions.”

To that end, Martelly has recently pushed to reinstate Haiti’s military, sparking fears about reviving a body notorious for decades of human rights abuses that led to its disbanding in 1995. Martelly though has called for an initial force of several thousand to bolster the weak national police.

Does Haiti, with its history of dictatorship and coups, really need an army? “In principle, every state has the right to have an army,” Fernández said. Asked if Costa Rica and Panama are examples to follow, he added: “This could be a model, but I’m not pushing for it. We are analyzing the information, and when I have an opinion, I will share it in private with the president.”

But looking toward the future, Fernández said Minustah does plan to reduce its total force by roughly 1,800 soldiers, 1,200 police officers and 350 civilians. Its budget will be cut accordingly, though exact figures haven’t yet been determined.

“I have a positive view of what will happen in Haiti, compared with how it was after the earthquake. The [U.N.] Security Council felt very comfortable with our approach to reduce troops now. If we continue working in a positive way, you will see the country stabilize.”