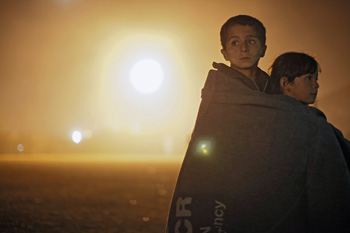 Lavinia Limón, the executive director of the U.S. Committee for Refugees and Immigrants, has been working with refugees for four decades, and she doesn’t hesitate when asked how serious the flood of refugees leaving war-torn Syria is.

“It’s the most serious [migration of people] and it is the largest since World War II. It’s bigger than Iraq; it’s bigger than Southeast Asia. This is the biggest refugee situation we’ve seen in 40 years. What are we going to do with these people?” she asks.

Syrian refugee children take shelter against the cold and fog shortly after arriving at the Zaatari refugee camp in Jordan in November 2012. The journey is a perilous one, often taking place at night and in temperatures that hover close to freezing. The camp now holds over 80,000 refugees, a fraction of the 3.8 million Syrians who have fled the country since its civil war began.

Countries all over the world are asking the same question, but most of them aren’t doing much about it. Through the end of 2014, 3.8 million Syrians have fled the country since its civil war — or revolution, depending on whom you ask — started four years ago (another 7.6 million have been internally displaced). According to the United Nations High Commissioner for Refugees (UNHCR), of the 13 million refugees it was responsible for in 2014, fully one-quarter were Syrians.

Amnesty also points out that the rest of the world has taken in a mere 2 percent of Syria’s refugees. A few governments stand out for their generosity — among them, Germany, Sweden and Brazil — while others stand out for entirely different reasons. Some wealthy nations, like the six Gulf states, Japan and Russia, haven’t accepted a single refugee. The United States has so far only taken in a few hundred Syrian refugees, though it is planning to accept several thousand in the coming years and it remains the single largest financial contributor to humanitarian relief efforts.

But human rights activists and international agencies are sounding the alarm that the world is not doing nearly enough to stem one of the worst migration crises in recent memory.

As the conflict continues and the human outpouring shows no sign of abating, advocates like Limón are stressing that not enough is being done to address the plight of Syrian refugees. In financial terms alone, of the $3.7 billion UNHCR requested in 2014 to deal with Syrian refugees, it received just over $2 billion — a little more than half of what it needs.

Limón says that a combination of factors have shaped the international community’s lagging response to the Syrian refugee crisis — economics and the expectation, call it hope, that the conflict would resolve itself quickly and that refugees could return to their homes once the fighting died down.

“The usual dollars for assistance that might go toward this type of crisis were really just not there,” she said, pointing to the lingering effects of the 2008 global economic recession. “And I think every government was hoping there would be a resolution and everyone would go back to Syria quick, and of course they were still dealing with Iraqi refugees that hadn’t returned to Iraq [after the Iraq War].”

But now that Syria’s war has dragged on and refugees keep streaming out, the international community is struggling to play catch-up — a process itself that will be slow.

“The international community had done a credible job throughout the years — I’ve been doing this for 40 years — in assisting refugees. I think the magnitude of this is really quite overwhelming for the systems,” said Limón.

Two countries that have been praised by advocates are Germany and Sweden, which have accounted for roughly half of the 134,585 asylum applications filed in 2014 alone. Germany has also pledged to take in 30,000 Syrians since 2013 — nearly half of the 79,000 resettlement slots that have been offered globally by wealthier countries.

Other European Union member states such as France and Britain have been far more reluctant to welcome Syrian refugees, even though the problem is landing on their doorsteps as well. Tens of thousands of Syrian migrants have attempted the treacherous journey by sea to start a new life in Europe, with thousands dying along the way and border countries like Italy struggling to handle the influx.

Meanwhile, across the Atlantic, the United States has been criticized for keeping its doors closed.

“The U.S. has been slow in resettlement efforts. We’re now several years into the war, and many refugees have been displaced for years now,” said Eleanor Acer, the director of refugee protection for Human Rights First. “The United States was also very slow to start up its resettlement program for Iraqi refugees, and that was a situation where the U.S. bore special responsibility to help those refugees.” 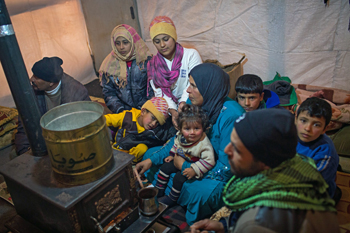 A Syrian family huddles around a stove inside its shelter as snow falls at the Terbol tented settlement in Lebanon’s Bekaa Valley in December 2013. Lebanon has taken in 1.2 million refugees from Syria.

To be fair, the United States accepts roughly 70,000 displaced people a year, the most of any nation in the world (many refugees now come from Iraq). It is also the world leader in providing humanitarian assistance to Syria — $3 billion so far.

U.S. officials also point out that UNHCR hadn’t even begun making recommendations on who should be resettled until late 2013. All refugees must undergo extensive security and medical vetting, a process that can take two years or longer. Moreover, security concerns have prevented the U.S. from conducting in-person interviews at its embassy in Lebanon, where a large bulk of Syria’s refugees reside.

Still, the numbers are paltry: Only about 350 Syrians have resettled in the United States.

In December, Anne C. Richard, assistant secretary of state for population, refugees and migration, pledged at a conference in Geneva that the United States would dramatically ramp up its resettlement of Syrian refugees.

“We plan to lead in resettling Syrians as well. We are reviewing some 9,000 recent UNHCR referrals from Syria. We are receiving roughly 1,000 new ones each month, and we expect admissions from Syria to surge in 2015 and beyond,” she said.

The increased resettlement of Syrian refugees is not only a humanitarian gesture, but also a pre-emptive strategy to keep Syria’s violence from destabilizing the entire region. Turkey alone is playing host to 1.6 million Syrian refugees, while Lebanon is buckling under the weight of 1.2 million refugees who have boosted the country’s population by 26 percent. That means one out of every four people in Lebanon is now a refugee.

These beleaguered masses — many of whom lost homes and loved ones to nearly four years of fighting that has claimed at least 200,000 lives — were initially welcomed by their neighbors. But as their numbers exploded, resentment grew that Syrians were taking jobs and social services in countries already grappling with unemployment and poverty.

“Humanitarian needs remain enormous. Government services and local communal services are under strain due to the increased demand, impacting service quality for both refugees and nationals, and threatening social cohesion. Lebanon and Jordan currently rank first and second in the world in refugees per capita,” said UNHCR in January.

This unprecedented influx has also exacerbated sectarian tensions between the region’s Shiites (who are generally aligned with Syrian President Bashar al-Assad) and Sunnis (who largely make up the rebel ranks). Infiltration by hard-line Sunni Islamists is also a major concern for nations like Turkey and Jordan.

Acer says this is also a vital consideration for the United States, whose key allies in the region are being threatened by the spillover effects of Syria’s meltdown.

Limón says she is happy that the United States is increasing its focus on Syrian refugees, but she doubts that it can take as many refugees as it claims — much less as quickly as it has said it wants to.

“The average processing time for a refugee to come to the United States is three years. You add the security checks on top of that,” she said. “Can the U.S. get to 10,000 refugees this year? No. It’s not logistically possible at this point, given the system.”

Richard seemed to concede as much when she spoke in December, though she said that resettlement — no matter how slow — is an important start for Syrian refugees. “But war’s true cost is measured in human suffering. Resettlement can help, one person at a time, to bring that suffering to an end,” she said.

Looking forward, Acer says there are important lessons to be learned from the Syrian crisis, primarily that Washington has to be quicker to respond.